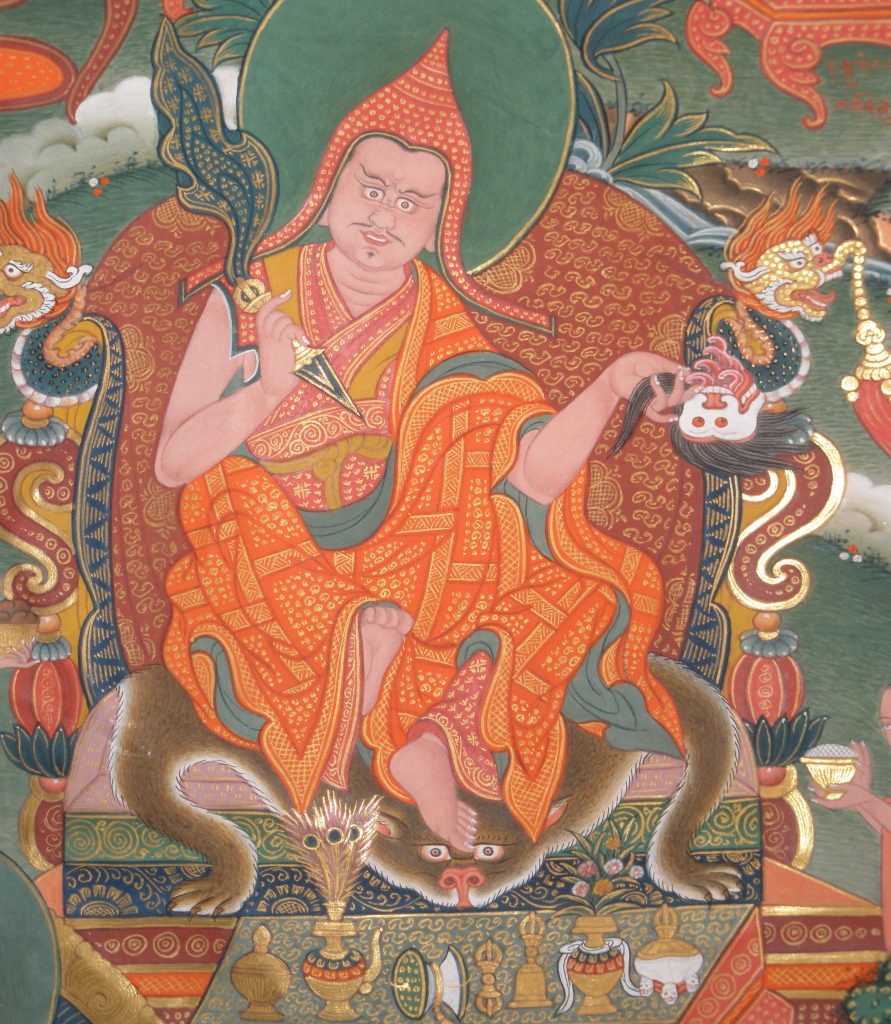 Of the translators throughout Tibet’s history, few can rival the reputation and renown of the legendary Ra Lotsawa Dorje Drakpa. And whilst Ra Lotsawa is today universally celebrated for his deeds and activities, it was not always this way. In fact, during his lifetime, he was thought of as a murderer and a proliferator of the dark arts. Ra Lotsawa famously faced and subdued immense obstacles and huge resistance when he was trying to introduce the Yamantaka tantras to Tibet. Today however, he is believed to have been a great saint, guardian and lineage holder of the highest teachings.

Ra Lotsawa was born in the border town of Nyenam, which lies on the main trading route between Tibet and Nepal. According to legend, soon after his birth the goddess Remati took the infant into her robe and traveled across Tibet for two months.

From a young age, Ra Lotsawa showed a great aptitude for linguistics and scholarship, as well as a deep affinity with the Dharma that could only be explained as past life imprints coming to fruition. He was seven when he began his Dharma education. He astonished everyone with his ability to easily memorise everything he was taught and clearly explain it back to his teachers. When he was eight, he learnt how to write and later, he went on to master various Tibetan, Nepali and Indian scripts. His father was a lineage holder of the Nyingma traditions of Yangdak Heruka and Vajrakila, and he passed these lineages on to his son.

At the age of 14, Ra Lotsawa made his first trip to Nepal where he trained under Barom Chagdum, the great Nepalese master who was an adept of the Vajravarahi and Yamantaka tantric systems. Upon meeting his guru, Ra Lotsawa prostrated and presented Barom with offerings of seven bolts of silk fabric. Then he humbly asked for the guru’s profound instructions.

The guru requested the mandatory offering for the initiation he wanted to bestow. Immediately, Ra Lotsawa presented all of the gold that he had in his pouch but Barom was not satisfied and continued to press him for more offerings. So Ra Lotsawa took off his clothes, folded them into a neat pile and offered them up. This was still not enough but Ra Lotsawa had nothing left to offer. Finally, he symbolically offered up his body, speech and mind, which pleased his guru greatly. Barom remarked that Tibetan devotion was not frivolous, just as he had thought. By the time Ra Lotsawa left Nepal, he had received, amongst many others, the initiations of the Vajravarahi and Yamantaka tantras from his guru Barom.

Upon returning to Tibet, Ra Lotsawa proliferated the Yamantaka tantras but encountered resistance as many could not accept an animal-faced yidam (meditational deity). They thought that it must be a corrupted practice and some accused him of propagating a non-Buddhist teaching, one that would lead all Tibetans to hell. Others questioned the legitimacy of his teachers and directed black magic against him. In one instance, a conflict ended up involving hundreds of villages and when some villagers marched against Ra Lotsawa, accusing him of harming them, he subdued them with his magic and sent their consciousness to the pure land of Manjushri.

In another instance, a lama grew jealous of Ra Lotsawa’s growing popularity and sent goddesses to create tremendous paranormal disturbances for him. Ra Lotsawa subdued the goddesses, who in turn offered themselves to serve him, an act which infuriated the other lama. His students pleaded with him to dispatch the lama but he initially refused as he would never attack another Buddhist master. However, a vision of Avalokiteshvara advised him to defend his lineage and engage in magical combat, and so he did.

Thus, over and over again, Ra Lotsawa found himself in confrontational situations where he had to defend his lineage. In the ensuing magical battles of psychic powers, it is said that in all, 13 lamas were slain in a divine play between great masters to highlight the power and efficacy of the Yamantaka tantras.

In 1076 CE, Ra Lotsawa attended the Fire Dragon Conference, the same religious gathering that was also attended by Lotsawa Loden Sherab. This meeting of the most important teachers of the era, both Tibetan and Indian, was dedicated to encouraging new and more accurate translation work. Following the meeting, Ra Lotsawa was selected to travel to India, accompanied by five other young Tibetans, including Loden Sherab and Dharma Drak, both of whom later became esteemed translators in their own right.

By the time Ra Lotsawa entered clear light, he was known throughout Tibet not just for his tantric powers but also for his other widespread Dharma activities. He spent much of his wealth renovating temples including Samye, Tibet’s first monastery, which was damaged by fire in 986 CE. He also sponsored numerous translations of Sanskrit texts into Tibetan, the duplication and recitations of scriptures at various monasteries, and the installation of many large Buddha statues.

Ra Lotsawa made innumerable butter lamp offerings, gilded many statues, and offered large quantities of tea to various temples and monasteries, from Nepal to China. He was also well known to liberate thousands of animals, thereby saving their lives. He became an inspiration for countless people, both lay and ordained, to engage in these practices throughout their lives.